adjusted from Bignon and Crônier, 2014

Cephalon
Psychopyge has a rounded frontal lobe. In front of the cepahlon, it has a long sword shaped projection. It’s eyes have 9 to 10 lenses maximum per row. The genal spine is longer than the glabella and there is a long spine on the occipital ring. There are no metafixigenal spines (spines between the genal spines and the glabella).

Psychopyge mostly occurs in the upper emsian of Morocco and Germany.

There are 6 species of Psychopyge. Pychopyge psyche (Basse, 2003) occurs in Germany, but not in Morocco. The others will be described below. 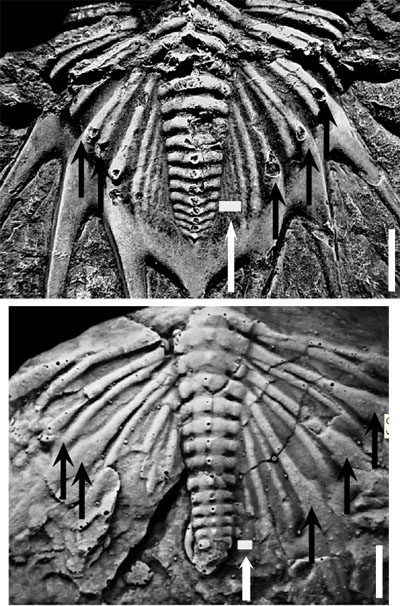 This species is a bit tricky. It was described only on an incomplete pygidium. And that causes a lot of confusion it seems. Many Psychopyge are named as P. elegans, but are actually P. angeles.

The picture (Basse & Müller 2016, used with permission) clearly shows the differences. P. angeles is the upper picture. P. elegans is the picture below.

P. elegans does not have the pygidial pleural spines that are present in P. angeles (see black arrows). Another difference is that the width of the pleural field posterior to the posteriormost rib is wider and segmented in P. angeles. In P. elegans this width is smaller and the field is not segmented (see white markings).

Cephalon:
P. angeles has a Y-shaped projection in front of the glabella. It is only a little bit longer as the thorax. The base is much wider. The glabella is granuated relatively evenly. The eyes have 32 rows of maximum 7-8 lenses.

Pygidium:
The pygidial axis has 17-18 well defined rings. They have evenly short thorns. There are 5 pairs of lateral spines. The fifth pair is clearly converging backwards.

Cephalon:
In front of the cephalon there is a long cephalic spine. It is wide at the base and ends in a point, what makes it look like a stretched triangular. It is covered with granulation.

Thorax:
The thoracic axis only has a median spine on the 4th and 8th rib.

Pygidium:
P. hammerorum has axial spines on the 2th, 6th, 10th and 14th rib. The lateral spines increase in length until the 4th pair. The 5th pair is one third in lenght of the 4th.

Cephalon:
P. praestans is characterized by a median point that is narrow at the at the base, in front of the cephalon. It also has a reduced cephalic limb. The eyes have 35 rows of maximum 11 lenses.

Thorax:
The thoracic axis only has a median spine on the 4th and 8th rib.

Pygidium:
The pygidial axis counts 18 ribs of which only the 1th, 5th, 9th, 13th and 17th carry a median spine or tubercle. The length of the pygidial laterial spines triples between the 1th and the 4th pair. The 5th is 3 times shorter than the 4th.

Cephalon:
P. termierorum is characterized by a very long median point in front of the cephalon (longer and smaller at the base than P. angeles). The eyes have 32 rows of maximum 10 lenses.

Pygidium:
There are 21 axial ribs in the pygidium, each with a median tubercle. It has only 6 pleural ribs. The 5 pairs of lateral spines are fine and their length increases towards the rear. The median spine is twice as short as the lateral ones.